Travelers keen to get away after new rules introduced 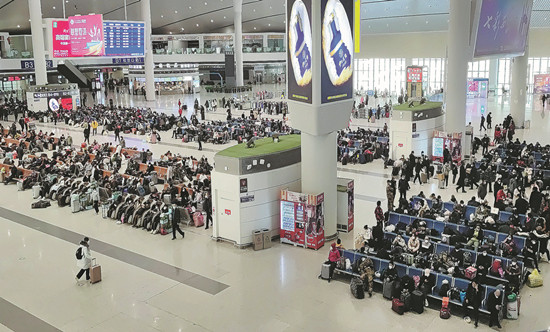 The domestic tourism market is breathing a collective sigh of relief and hoping for a strong recovery after the central government's relaxation of COVID-19 control measures.

As of last Wednesday, among the 10 new measures released, cross-provincial travelers are no longer required to show negative nucleic acid test results from within 48 hours after arriving at their destinations. Those that are symptomatic or have mild cases of COVID-19 can quarantine at home.

From Tuesday, the government is scrapping the "digital travel code" to make travel more unrestricted and convenient. Developed and operated by the China Academy of Information and Communications Technology, the service used cellphone reception data to track the cities that travelers had been to in order to determine whether they had potentially been somewhere marked as "high risk" for COVID-19.

These adjustments have had an immediate impact on the travel market. Online travel portal Qunar said that flight bookings for the Spring Festival holiday — falling in late January — surged by a factor of nearly 8.5 times after the new policy was announced on Wednesday.

Guo Lechun, deputy director of Qunar's big data research academy, said that flight bookings will hit a three-year peak during the upcoming Spring Festival, though that will only be roughly 80 percent of the level before the pandemic.

According to Trip.com Group, an online travel agency, searches for flight tickets on its platform rose by 160 percent immediately after the new policy was announced.

Lvmama, another online travel agency, said that searches for flights and train tickets on its platform also soared after the news was released. Destinations including Sanya in Hainan province, Chengdu in Sichuan province and Shanghai have become popular for its users to spend the coming New Year's Day and Spring Festival holidays.

Shen Jiani, a senior researcher at Lvmama, said the 10 new measures are great news for the tourism market.

She said the new policy has stimulated people's desire for travel and visiting their hometowns, and the market will see a strong recovery.

Go on a leisure tour of Yangzhou