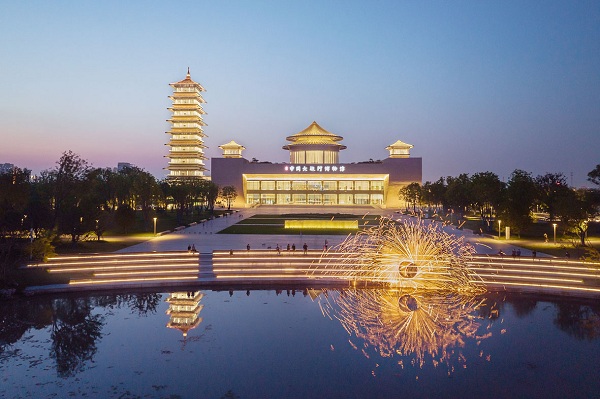 East China's Jiangsu province has made remarkable results in the construction of the Grand Canal Cultural Belt over the past two years by launching a number of projects and events.

With a history of more than 2,500 years, the Grand Canal linking Beijing and Hangzhou, Zhejiang province was the main artery for ancient China's north-south traffic and passes through eight provinces and municipalities, with a total length of 2,700 kilometers, making it the world's earliest and longest canal.

The various sections and sites of the Grand Canal were included in the World Cultural Heritage list in 2014 by UNESCO.

The section in Jiangsu province has a length of 790 km. It was the earliest-constructed section with the widest coverage and the longest mileage compared with those in the other provinces and municipalities.

During its history of more than 2,500 years, Jiangsu has formed a canal culture that features communication, inclusiveness and openness.

According to the Jiangsu Provincial Department of Culture and Tourism, the province has abundant resources relating to the canal's heritage.

As the core area of the Grand Canal, the Jiangsu section boasts about 40 percent of the UNESCO heritage sites.

The local governments have prioritized the projects of the cultural belt and formulated six special provincial-level plans for the preservation and inheritance of the Grand Canal cultural heritage. They have also boosted the integrated development of cultural tourism; the management and protection of river systems; the protection and restoration of the ecological environment; the interpretation and promotion of cultural value; and the development of modern shipping business.

A total of 11 cities and districts in Jiangsu along the Grand Canal have introduced related action plans.

The province has also set up China's first Grand Canal culture tourism development fund and issued China's first special bond for the construction of the Grand Canal Culture Belt, as part of its efforts to broaden the financing channels for major projects.

Through the efforts of all parties, the historical buildings along the canal have been renovated and better managed.

The once-dilapidated courtyards along the Xizhi Street river bank in the city of Changzhou have also been renovated.

Xuzhou city in northern Jiangsu continues to promote the integrated development of the canal culture and the Han Dynasty (206 BC-AD 220) culture. Xuzhou was the birthplace of the first emperor of Han.

Heads of eight cities and 40 county-level regions have been assigned the job of "canal chiefs" to take charge of improving the Grand Canal's environment.

The irrigation system between the Liyun Canal and the Gaoyou Lake, which is known as Liyun-Gaoyou Irrigation Area, was selected as a world heritage site for irrigation engineering by the International Commission on Irrigation and Drainage last year, which marked the first of its kind in Jiangsu province.

In 2021, the water of the canal's Jiangsu section was classified as Grade III on China's water-quality index, meaning it is safe to drink.

The province has also made great efforts to promote the cultural value of the canal from various aspects. The China Grand Canal Museum in the city of Yangzhou, beginning operation last June, has received more than 1 million visitors.

Covering around 80,000 square meters, the museum contains more than 10,000 cultural relics, such as ancient books, paintings, calligraphic works, tablet inscriptions, ceramics, metals and miscellaneous objects, which reflect the theme of the canal from the Spring and Autumn Period (770-476 BC) to the contemporary period.

Jiangsu took the lead in establishing a provincial-level research institute, a key high-end think tank, for studying the Grand Canal.

A number of activities have been held in the province, including the Grand Canal Culture and Tourism Expo, the Grand Canal ecological protection volunteer service and research tours for children.

In addition, the Jiangsu Provincial Sport Bureau has launched a series of sports events relating to the Grand Canal, including hiking along the canal.

The province has hosted the World Canal Cities Forum for 15 consecutive years, which continues to expand global influence with 221 members from across five continents.

Since 2020, two national 5A-level and 10 4A-level tourist attractions; seven national and regional tourism demonstration zones; and four national tourist resorts and leisure sites have been established along the Grand Canal in Jiangsu.

A group of tourism resorts and canal-featured blocks have been established to promote Jiangsu's canal cultural tourism brand. Local residents' sense of gain grows with the culture integrated with cities' construction.

Local governments have also strengthened law enforcement against illegal acts such as damage to cultural relics and pollution from ships over the past two years.

As the longest artificial waterway in the world, the Grand Canal has provided a strong support for Jiangsu's socioeconomic development. Last year, the waterborne freight volume of the Jiangsu section of the Grand Canal reached 980 million metric tons, accounting for one-third of the province's total transportation.