The Yangzhou Brick Carving Art Exhibition kicked off at the 486 Intangible Cultural Heritage Cluster in the city of Yangzhou, East China's Jiangsu province, on Sept 17 and lasted for four days.

Yangzhou brick carvings were included in the list of municipal intangible cultural heritage items in 2018 and the exhibition was the first special exhibition featuring brick carving artworks in the city.

The exhibition displayed both ancient Yangzhou brick carving relics and modern representative works from inheritors of the handicraft in the form of pictures and objects.

On show were brick carvings featuring existing gardens, halls and residences in Yangzhou, including the Slender West Lake and the Geyuan Garden.

The exhibits were mainly created by local artisans. Six contemporary craftsmen exhibited pieces in  their own unique styles, winning the admiration of visitors.

Brick carvings in Yangzhou combine the motifs of the ancient Huizhou-style and Jiangsu styles, as well as influences from five other schools, such as the Beijing and Guangdong schools.

Yangzhou brick carvings are simple and elegant. They are widely said to have played a crucial role in adorning traditional architecture and have won high praise over the years. 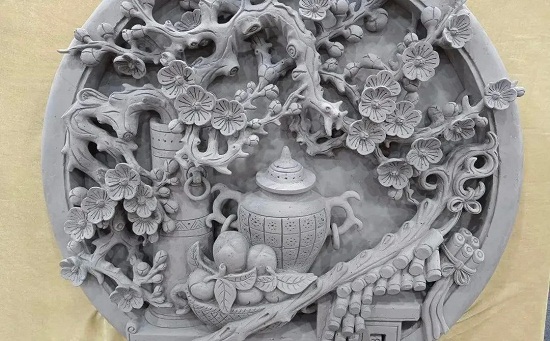