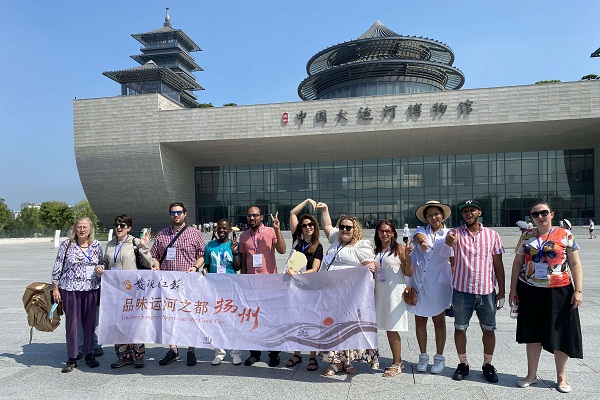 Foreigners pose for a photo in front of the China Grand Canal Museum in Yangzhou, Jiangsu province. [Photo/Jiangsu International Online]

A group of foreigners in East China's Jiangsu province participated in the "Discover Jiangsu: Appreciate the Canal City" activity held in Yangzhou from July 21 to 22, to learn about the city's history and culture.

At the opening ceremony of the activity, a variety of shows related to the Grand Canal, including Yangzhou Opera and puppet shows, were staged to showcase the intangible cultural heritage of Yangzhou.

Participants then visited the China Grand Canal Museum to understand the influence the canal has had on the politics, economy and culture of ancient China. Maral, a high school English teacher from the United States, said she was impressed by the museum's collections and the use of technologies such as virtual reality and LED displays significantly improves visitors' experience.

She added that more than 500 canals in the world, including the Erie Canal in her home country, are nurturing over 3,000 cities and cultivating brilliant cultures.

Spaniard Nuria Taberner Cena, who currently teaches at Nanjing University, said she was amazed by the views of the Slender West Lake when she first visited Yangzhou five years ago.

"I hope more foreigners can come to Yangzhou in the future to enjoy the canal and culture here," she said.

Discover Jiangsu is a series of activities organized by the Information Office of Jiangsu Provincial People's Government. It involves inviting foreigners living in Jiangsu to take part in activities to learn more about the province and encouraging them to recommend the place to the world.