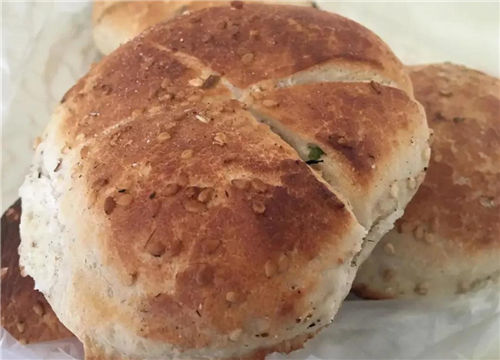 Straw oven pancake is listed among the first batch of intangible cultural heritages in Yangzhou in 2008. [Photo/WeChat account: yzs_lyj]

Caolu pancake, or straw oven pancake, is so called because the fuel used in the oven is made of wheat straw, which gives the pancake a unique straw-like fragrance.

The straw oven pancake from Dayi town in Yangzhou has a history of nearly 90 years. In 2008, it was listed among the first batch of intangible cultural heritages in Yangzhou.

During the Ming and Qing dynasties, industry and commerce in Dayi town flourished.

The town was one of three biggest bull trading markets in Jiangsu province, with the other two being Xuzhou and Danyan.

The highest daily trading volume of bulls ever seen in the town exceeded 10,000 heads.

Straw oven pancakes at that time had become a popular choice for businessmen coming from afar.

The pancake, nicknamed "Baba", still enjoys immense popularity among locals due to its golden hue, strong fragrance, and soft texture, coupled with the fact that it is easy to digest and absorb.

It is usually eaten with pickles, tofu or garlic. Some locals like to cut the pancake in half and put a youtiao, or deep-fried dough stick, in the middle.