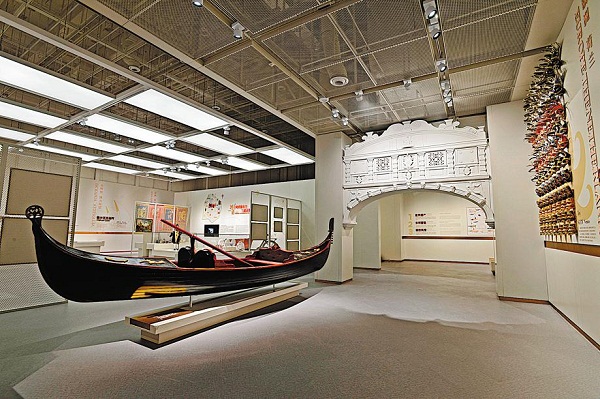 An exhibition hall at the China Grand Canal Museum, in Yangzhou, Jiangsu province, where world's canals and canal cities are introduced.[Photo provided to China Daily]

The Tongji Canal, also called the Bianhe River, is 650 kilometers long and runs through six cities in three provinces.

Built by Yang Guang, the second emperor of the Sui Dynasty (581-618), it was a major construction project connecting the Yellow River with the Huaihe River.

This cross section of the old riverbed is 25.7 meters long and 8 meters high. It was dug out and transported from Kaifeng in Henan province to Yangzhou, with the support of Henan Provincial Institute of Cultural Relics and Archaeology.

The exhibit clearly outlines the river's bottom layers from the Sui Dynasty to the Qing Dynasty (1644-1911), and directly demonstrates how the river channel changed from wide to narrow until it was completely silted.

Occupying an entire wall, the display, which is the largest exhibit at the museum, looks like a giant screen.

Gong Liang, deputy director of the Jiangsu Provincial Department of Culture and Tourism and curator of the Nanjing Museum, says that the China Grand Canal Museum is different from all the other museums themed on the Grand Canal in the country.

"While all the others show the canal from a certain perspective or in a certain region, the museum in Yangzhou shows it comprehensively, from the canal's start to the end, across all times, from the Spring and Autumn Period to present day, and from various perspectives, to present its history and culture.

"Visitors can comprehend the wisdom of ancient craftsmen, various styles of ancient boats, water transport, food and natural scenery along the canal," Gong says. "They may also notice the intersection of the canal and the countries involved in the Belt and Road Initiative."

Zheng Jing, curator of the museum, says that "the museum is far more than a tourist attraction". Zheng was previously in charge of the teenage section at the Nanjing Museum.

She adds that the museum authorities plan to develop it into a national first-class museum and 5A-rated scenic spot, which will hopefully be named among the highest level tourist attractions in China. "Over the next one to two years, about 1.5 million visitors are expected to visit the museum annually," she says.