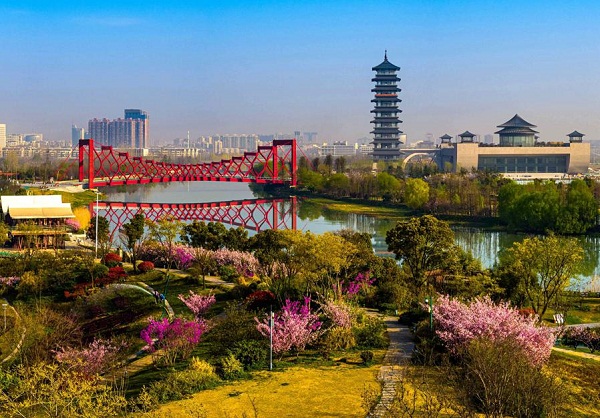 Liu Hua uses the word "dramatically" to describe how his living environment has changed in the past seven years.

The 70-year-old Yangzhou native lives in a community near the Sanwan Ecological Cultural Park, where the China Grand Canal Museum is located.

He still remembers how polluted the canal was seven years ago. He chose not to walk near the banks of the waterway so as to avoid seeing the seemingly endless layer of trash floating on the water and the lingering pungent smell of emissions from nearby chemical plants.

"The mosquitoes annoyed me the most. When you walked near the canal, countless mosquitoes pounced on you from the grass at the bank," says Liu. "No neighbors chose to jog or organize group dances near the canal."

Since Yangzhou, of Jiangsu province, started to clean up the environment around the canal in 2014, Liu and his neighbors gradually extended their exercising territory from within the community to the whole Sanwan park.

To construct the park, more than 80 chemical plants, pharmaceutical factories and insecticide companies were relocated. The Yangzhou government also closed down many docks, cleaned up illegally built riverside houses and restored wetlands along the canal.

"The ancient canal has been rejuvenated and looks fresh again."

In 2018, the Sanwan park was rated as a national 4A-level tourist attraction and was opened to locals and tourists for free.

Now, Liu just needs to walk for five minutes to get to the park from his home for group activities, such as dancing, or to go jogging.

He often arrives at the park around 4 pm and walks along the bank, enjoying the refreshing breeze, for around two hours, weather permitting.

"We no longer have to disturb the neighbors in our communities, who do not like the loud music that we dance to," says Liu. "Actually a lot of visitors at the park gather to watch our dance."

As one of the province's eight cities sitting on the Grand Canal, Yangzhou has constructed nearly 400 parks along the 153 kilometers of the waterway that runs through the city, all of which are free of charge to enter and enjoy.

Baoying county in Yangzhou used to have hundreds of households and more than 1,000 docks and jetties along its 40.5-kilometer stretch of the canal and sewage was directly discharged into the water.

To improve the environment, the Baoying government not only shut down many of the docks and relocated the households, but invested more than 600 million yuan ($93 million) to plant 600,000 square meters of trees, build community squares and jogging trails.