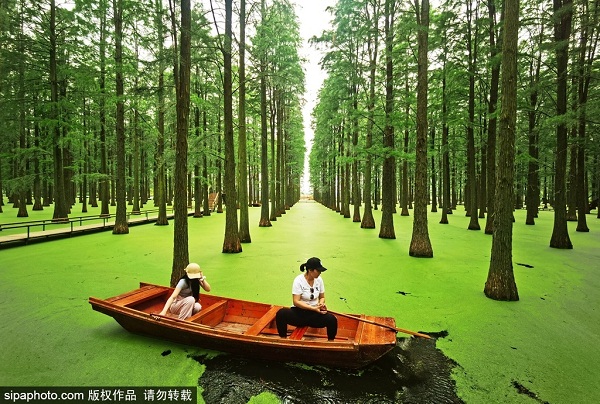 As sunlight sparkles on the green water covered by duckweeds, tourists row across trees and appreciate the natural beauty in Luyanghu Wetland Park, Yangzhou, Jiangsu province.

For about 20 years, local officials have been devoted to revitalizing the countryside economy. On the basis of green development, the remote village has made great progress by combining agriculture and tourism, placing equal emphasis on increasing people's income and environment protection.

Zhang Fulong, the secretary of the CPC committee in the village, began to exploit tourism resources of Luyanghu Lake in 2000. Over 20 million yuan ($3.13 million) has been invested to establish natural reserve for wildlife, wetland park and tourist attractions, Yangzhou Broadcast & Television Media Group reported.

Yin Gaolong, a 65-year-old villager, said he earned at most 20,000 yuan a year before, by farming and picking up some odd jobs.

The farmer's life changed after he was employed by a local holiday resort, which pays him nearly 60,000 yuan per year.

In 2020, the output value of primary, secondary and tertiary industries in Luyanghu village reached 360 million yuan, with per capita income registering 50,000 yuan.

In this year's Government Work Report, China has also pledged to implement the strategy of rural vitalization in an all-round manner, promoting the stable development of the agricultural sector and increasing farmers' income.