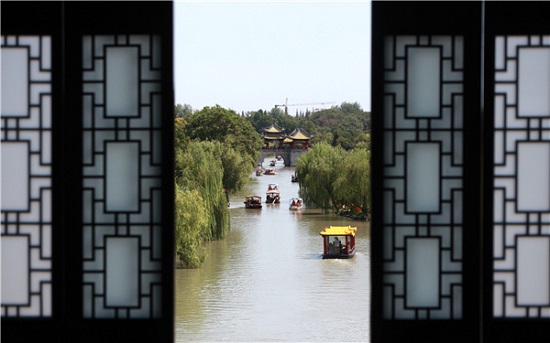 Located in the subtropical humid climate zone, Yangzhou has four distinct seasons consisting of moist summers and dry winters, and its annual average temperature is 15 C. The hottest days occurs in July, while the temperature averages 28 C. On the other hand, January is the coldest month with a moderate temperature of 1 C. The rainy season lasts from June to July. Typhoons often occur in August and September.

The best time to visit the city is spring, which is during March to April. At this time, various flowers around the Slender West Lake are blooming with a riot of color, especially the pure white Wild Chinese Viburnum. During these days, Yangzhou portrays a sunny and vigorous image of a water city. However, during September and October, the pretty lakes are enveloped in the light mist and clouds, showing different style of scenery.

Summer is also the rainy season with about 45 percent of the year's precipitation falling during this time. There are various activities include the Yangzhou Food Festival, local theatrical performances and a cruise around the city. Mid-June to July is known as the"plum rain season", because the nearby plum farms come alive during the heavy rains of this climate chapter.

In winter (September and October), the pretty lakes are immersed in the beautiful light mist and clouds which looks so different from sunny days. Many folk performances are available here such as the dragon and lion dances and a gong and drum band in the winter. It's always good to take umbrellas or water-proof jacket with you when traveling in Yangzhou.