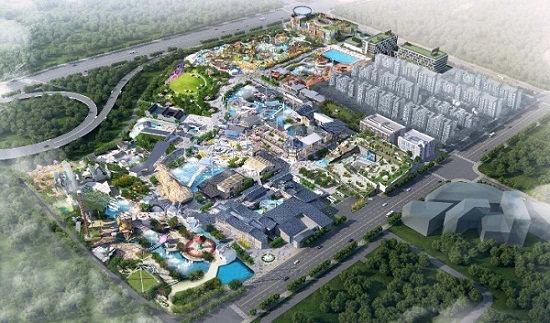 A plan map of the Fancy City. [Photo/yznews.com.cn]

Fancy City, a tourist destination invested in by Overseas Chinese Town (OCT) Group in Yangzhou, is expected to start operation in 2021, according to a brand event held on Jan 13.

The 150,000-square-meter theme park will include three theme branches with 35 sets of amusement park equipment, as well as 50 performances and shows, including float parades, fountain light shows, and song and dance dramas.

The design of the amusement park has been inspired by the Grand Canal, as well as local history and culture, according to officials from OCT Group.

The theme park will provide visitors with an exciting rollercoaster called "Challenge 720" and the longest rail-rafting water route in China, which allows visitors to learn about the development of the Grand Canal culture on a boat, which has a dark awning.

Cultural venues have also been built inside the theme park, including the Guangling Academy, which boasts an ancient style. A series of art exhibitions, cultural experience courses, and cultural forums are expected to be held inside.

Zhuang Zhiliang, deputy director of Yangzhou OCT, said that over three million visitors are expected to tour the theme park every year. More trendy cultural projects will be introduced to the park in the future, making it an attractive tourist destination in the Yangtze River Delta.