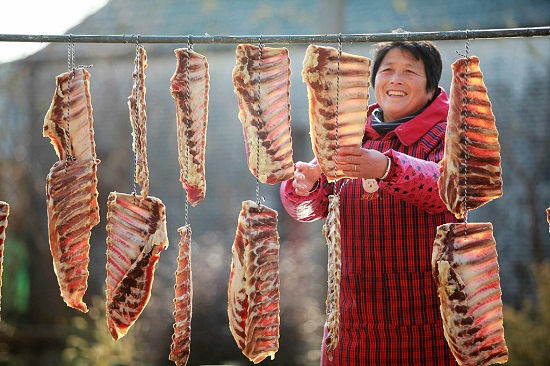 A woman in Yangzhou, Jiangsu province hangs up cured meat to dry on Dec 19 as the 22nd solar term of the year, the Winter Solstice, begins this year on Dec 21. [Photo/IC]

It is a tradition for residents of Yanhu town, Yangzhou's Hanjing district to make cured meat, pork sausage, and dried fish in preparation for the rounds of feasting during the winter, especially the Spring Festival, starting prior to the Winter Solstice.

The traditional Chinese lunar calendar divides the year into 24 solar terms. Winter Solstice, the 22nd solar term of the year, begins this year on Dec 21.

On the first day of Winter Solstice, the Northern Hemisphere experiences the shortest day and the longest night of the year, as the sun shines directly on the Tropic of Capricorn. From then on, the days become longer and the nights become shorter. The Winter Solstice also marks the arrival of the coldest season in the year.

In spite of the urban spread of China's population, the year-end tradition of preserving meat is still very popular, where a variety of birds, cuts of beef, mutton, pork, and fish can be seen strung up in backyards and balconies alike to catch the winter north wind and sun.