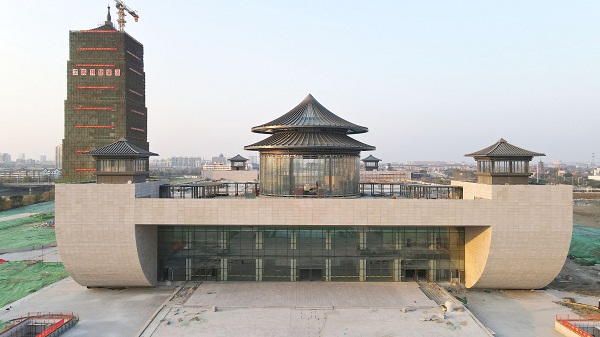 An outlook of the Yangzhou China Grand Canal Museum. [Photo/yznews.com.cn]

The museum is located in Yangzhou's Sanwan Park and consists of a four-story building in the shape of a ship, and a 100-meter-tall pagoda.

Designed by architect Zhang Jinqiu, who is a member of the Chinese Academy of Engineering, the museum will be operated by Nanjing Museum and will open to the public on July 1, 2021.

"The museum will make the most of the Grand Canal basin's long history and views," said Xu Rong, chief engineer of the China Northwest Architecture Design and Research Institute.

The museum, placed next to the canal, covers over 13 hectares with an exhibition area of 18,000 square meters. 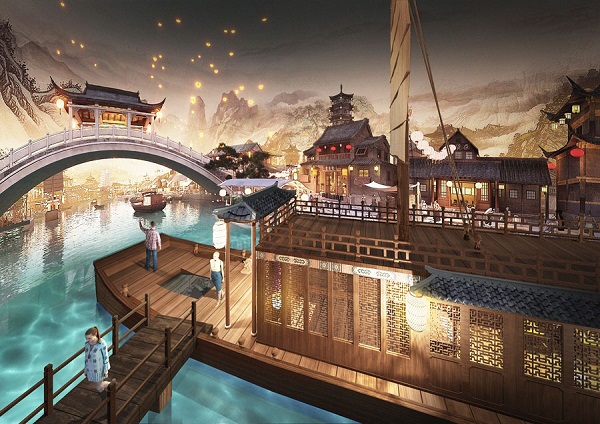 A plan map of one of the 11 themed exhibitions inside the museum. [Photo/yznews.com.cn]

It will have 11 themed exhibitions telling the history of the Sui-Tang Grand Canal built during the Sui and Tang dynasties (581-907), the Beijing-Hangzhou Grand Canal and the East Zhejiang Canal. These canals connect southern and northern China and feature a wealth of historic and cultural heritage, while continuing to be used for transport, irrigation and flood control.

Gong Liang, director of Nanjing Museum, said the museum will be an encyclopedia of the Grand Canal, with displays of water conservancy projects, water transport and salt businesses, commercial trade, food, operas, people's lives and the natural ecology along the canal.

So far, the Yangzhou China Grand Canal Museum has 10,000 exhibits, including 20 groups of large ones, making it the best collection to show the huge scale of the canal and how people changed nature. 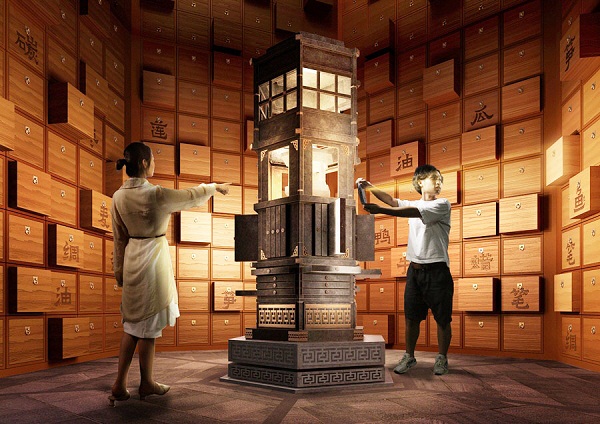 The museum designs a room-escape game for teenagers aged 10-15. [Photo/yznews.com.cn]

Besides, teenagers aged 10-15 will be able to try a room-escape game inside the museum, during which the "imprisoned" players are required to escape from a boat by solving 10 puzzles and connecting clues in a fixed period of time.

The Grand Canal is a vast waterway system in China that runs from Beijing in the north to Hangzhou, Zhejiang province, in the south. Stretching 1,794 kilometers, the canal was a pillar for the economy, social stability, and government functions in ancient China. It also benefited the evolution of Chinese culture by enhancing communication between the south and the north.

In 2014, about 1,000 km of the man-made waterway was listed as a UNESCO World Intangible Cultural Heritage site. Roughly a third of that runs through Jiangsu, according to the provincial government.

"The museum is expected to promote the integration of culture and tourism by making the public aware of the cultural heritage of the Grand Canal and enabling them to enjoy the benefits brought by its preservation and protection," Gong said.