The ancient city of Yangzhou 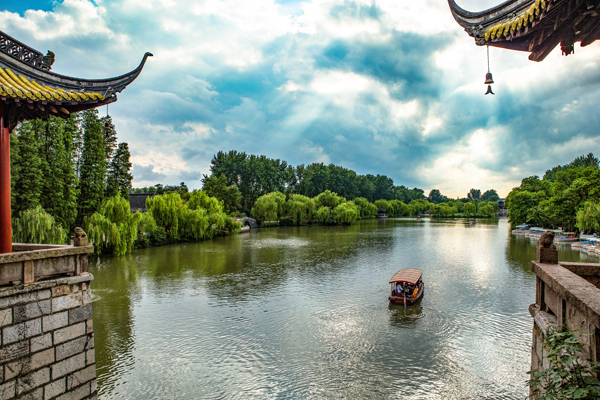 A boat travels at the Slender West Lake, Yangzhou. [Photo/IC]

Located at the intersection of the 1,100-mile-long Grand Canal and the Yangtze River, the ancient city of Yangzhou used to be a trade center along the ancient Silk Road.

First built in 486 BC during the Spring and Autumn Period (770-476BC), Yangzhou developed into a famous port city after the construction of the Grand Canal during the reign of Emperor Suiyang at Sui Dynasty (AD 581-618).

As a water transportation hinge and the biggest salt distribution center in history, Yangzhou was one of the 10 biggest cities along with Beijing, Nanjing and Guangzhou that had a population of more than half a million in the world at the beginning of 1800s.

Italian merchant traveler Marco Polo claimed he served as an official in Yangzhou under the Mongol emperor Kubilai Khan between 1282 and 1285. The discovery of the tomb of Katarina Vilioni, a member of an Italian trading family in Yangzhou, indicated that there used to be a thriving Italian community in the city in the 14th century.

To preserve the historical and cultural heritages in the ancient city, the municipal government of Yangzhou has approved and carried out the Conservation Plan of Historic City of Yangzhou since 2015.