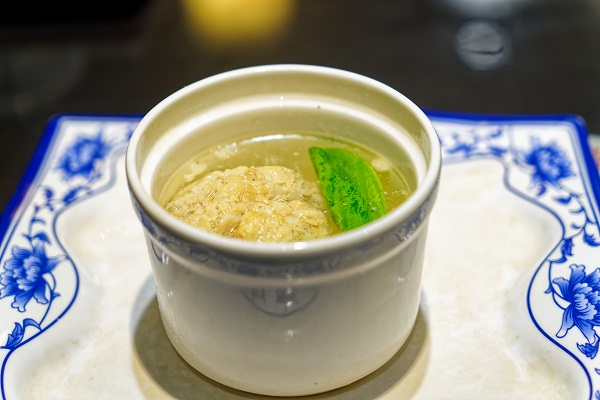 This Huaiyang gastronomic delight hails from the Yangtze River Delta in Jiangsu province and is a bit more filling than your usual Chinese fare. Soft and juicy, lion's head meatball (shi zi tou) is the quintessential Chinese meatball. Its lean pork surrounds green vegetables, and, when done right, the aroma is absolutely mouthwatering. Lion's head adheres to the core principles of Chinese cuisine, that a truly good dish should "look good, smell good, and taste good".

The lion's head soup is said to originate from Emperor Suiyang's cruise down the legendary Grand Canal. In the city of Yangzhou, officials presented four opulent dishes inspired by four famed local landscapes, following the fashion of the time. There was one dish that impressed the emperor, his concubines and officials alike: sunflower chopped meat, inspired by the beautiful scenery in Sunflower Hills. After the emperor left, the dish gradually became a must-have folk dish in the area.

However, the sunflower meat dish did not roar until the next dynasty,, the Tang Dynasty (AD 618-907), renamed at the feast of Wei Zhi, the Duke of Huan. Upon seeing the dish, this food connoisseur noticed that with the vegetables resembling a lion's mane, the meat ball is like a lion's head. Wei Zhi thus toasted: "To commemorate today's feast, this dish shall be renamed lion's head." In the Qing Dynasty (1644-1911), the southern dish was brought back to the Imperial Palace during one of the Qianlong Emperor's expeditions south. From a southern staple, lion's head was adapted into the Chinese imperial cuisine.

There are many ways to make the lion's head, but the most popular and the best known is the braised style. The secret to making a perfect lion's head lies in the minced meat, as well as the pot; both determine the dish's juiciness and texture. Some also add crab meat or water chestnuts for variations in flavor. In the Qing Dynasty cookbook Suiyuan Shidan (Recipes from the Garden of Leisure), the author and poet Yuan Mei remarked: "Large as a teacup, the texture was tender and exquisite. The soup was especially light, fresh, and delicious; the meatballs melt in your mouth.

A classic dish in Chinese cuisine, lion's head migrated and was adapted across China. In the North, it is simply called giant meatball, or the auspicious meat ball of quadruple happiness. The story goes that the former premier Zhou Enlai was a lion's head meatball fan, and it was one of his three favorite dishes. The prodigious artist Zhang Daqian was also a master at making lion's head meatball. Zhang's tips? Chop the meat to the size of rice grains so that the spaces left in the mixture can lock in the delicious juices.

From the Yangtze River Delta to the emperor's table, these lion's head meatballs have been adapted and changed to suit the tastes of the nation's delicate palate. Today, it can be found almost anywhere; now it is your turn to try to add your own spice to this succulent savory dish.