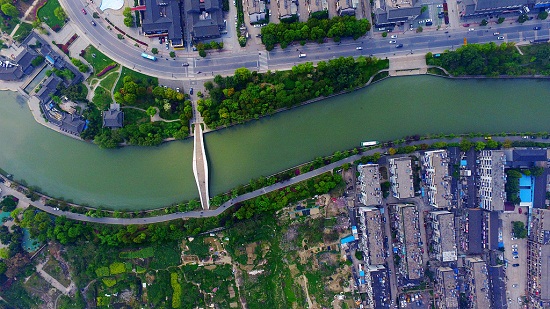 Gu Feng, an expert on the Grand Canal, was invited to give a lecture held by Yangzhou Library Nov 29 to outline the history of the Beijing-Hangzhou canal.

The Yangzhou section of the Grand Canal has a history of over 1,000 years. China's history of canal excavation spans almost 3,000 years, half of the duration of Chinese civilization, according to Gu. China gained rich experience in water control and utilization during the long process of excavating the canal. The Grand Canal, which was completed during the Sui Dynasty (581-618), is part of the country's success in hydraulic projects. China had successively excavated many  ditches and canals before the Sui Dynasty, including Dujiangyan irrigation system, Zhengguo Canal and Xianggui (Hunan-Guangxi) Canal.

The Grand Canal has played a vital role in the history of Chinese civilization. Gu said that the canal has enhanced economic and cultural exchanges between the north and the south, strengthened the central government's control, promoted national unity, and brought prosperity to many cities and towns along the canal. As a man-made waterway, the canal also has boosted the development of society.

The Grand Canal is regarded by global canal experts as the mother of all canals in the world. Different from those built during the period of industrial civilization, China's Grand Canal represents the greatest masterpiece of hydraulic technology and engineering from the ancient era of farming civilization. It is a benchmark in terms of adapting to the diversity and complexity of circumstances, and uses various hydraulic projects with regional characteristics. It also required great manpower and material resources to construct dams, dykes, relief channels, water tanks, wharves and warehouses, which are incomparable to any similar projects in the world.

The Grand Canal boasts the functions of water transport, irrigation, flood discharge and ecological improvement, and serves as an important economic belt and cultural corridor, enriching both tangible and intangible traditional Chinese culture.

As a world cultural heritage site, the Grand Canal still plays a role in water transport and contributes to the South-to-North Water Diversion Project. Taking Yangzhou as an example, ships transport over 100 million tons of goods annually through the city's Shaobo ship lock on the Grand Canal.