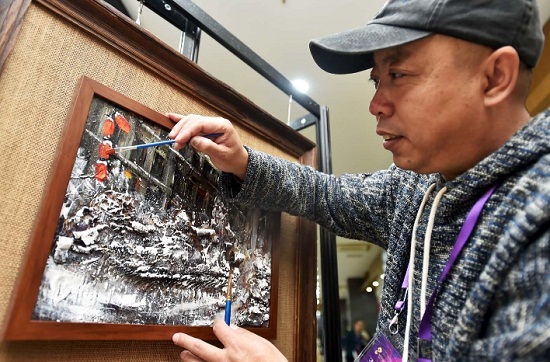 Tang Debin from Harbin, Heilongjiang province, is skilled in drawing on the bark of birches. [Photo/yznews.com.cn]

All nine cities, including Quanzhou, Ningbo, Qingdao, Changsha, and Yangzhou, have won the title of "Culture City of East Asia".

Chen Meiqi, an inheritor of Yangzhou's traditional woodblock printing, showcased her skills at the exhibition.

In 2006, the traditional craft was listed among China's first national intangible cultural heritages, and Chen was honored as a representative inheritor. In 2009, Chinese woodblock printing was included in UNESCO's Lists of Intangible Cultural Heritage.

The ancient craft, which has been largely replaced by modern printing techniques, is now mainly practiced as a traditional art form. Great patience, diligence and skill are required to carve a single block of wood. To complete a book, craftsmen must carve dozens of blocks. 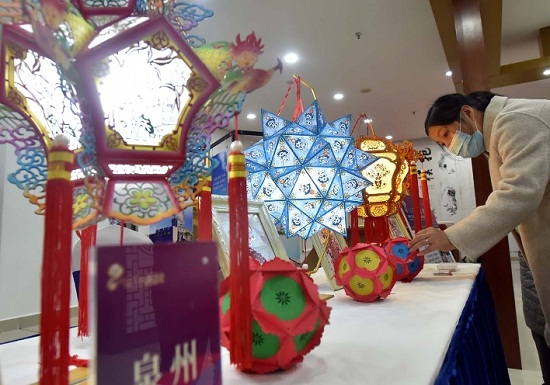 Quanzhou lanterns are famous for the exquisite craftsmanship and specialized design. [Photo/yznews.com.cn]

Lin Weizhong from Quanzhou is a lantern craftsman. He found the process of making lanterns similar to making Yangzhou's traditional woodblock printing – by using a carving knife to finely trace on the cardboard.

Straw weaving, another art that requires patience and steady hands, was presented by Wang Ruiqin from Qingdao's Xinhe town. Xinhe town is now the largest straw weaving handicraft processing and export base in northern China, she said.

Jointly established by China, Japan and South Korea in 2014, the East Asian City of Culture campaign is an important cultural brand in the region.

The campaign aims to promote regional cultural diversity and increase mutual understanding among the three countries. Every year, the campaign selects one city from each of the participating countries to be the Culture City of East Asia.

With an expanded international fame, these cities will act as models for cultural relic preservation and proper urban construction, which in return will benefit the region and its people. 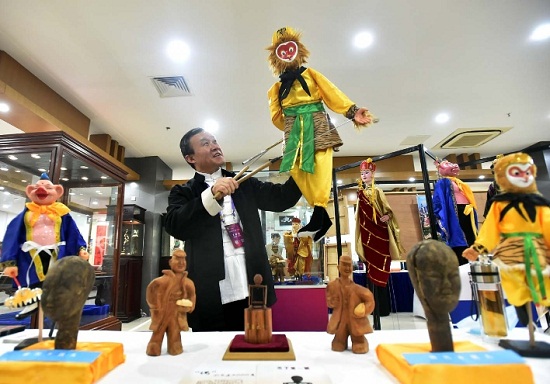