Guardians of an ancient craft 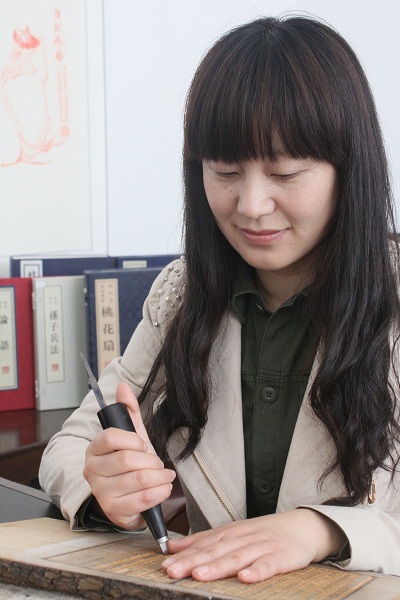 Chen Meiqi, the craftsman's daughter, fell in love with woodblock printing and now practices it with her father. [Photo provided to China Daily]

It's no exaggeration. Chen once spent 20 years carving a copy of a book that was written during the Qing Dynasty (1644-1911).

The passion for woodblock printing has run in Chen's family for more than 100 years. His grandfather was a famous Qing woodblock craftsman. Chen himself has been practicing the craft since he was 13 years old.

On his deathbed, Chen's father told him that the family should pass the woodblock printing skills from generation to generation. Chen made a promise to his father and kept it, even though he had to jokingly "trap" his daughter into it.

Chen Meiqi, the daughter, said she had no intention when she was small of pursuing the woodblock printing craft.

"I grew up with all the materials and tools of woodblock printing around me," she said. "You just ignore them when you see them too frequently."

Things began to change when she felt sick and went to her father's house one year to recover. The father forbade housework and insisted she simply rest. After doing that for more than a monthshe was bored and suggested to her father that maybe she could learn how to carve woodblocks to kill time.

"My father encouraged me and taught me with great patience as I learned how to carve the blocks. Then he became strict after he saw I had a genuine interest."

She said her father had 20 students before 2005, but ultimately only one of them continued with the study. Then, after it was included in UNESCO's Lists of Intangible Cultural Heritage in 2009, the government began to invest more in its protection. But more preferential policies and investments should be given to attract young people and better protect the old craft, she said.

The Chens and the city of Yangzhou are making efforts to attract more people's attention through publicity. They have made light covers, fans and other daily items using woodblock printing and sold them at low prices.

"The public will have access to it through these things," said Chen Meiqi. "The products look very fancy and elegant. Members of the public will get to appreciate woodblock printing, and then they'll protect it."

Jin Suyang contributed to this story.