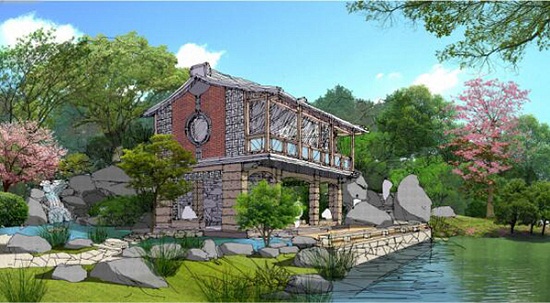 A planning map of the Xiamen Garden [Photo/yznews.com.cn]

Construction started on Xiamen Garden, the first city garden of the 2021 International Horticultural Exhibition in Yangzhou, on June 30.

The International Horticultural Exhibition, the world's top horticultural exhibition aiming to showcase the latest horticulture technologies and collections, will be held in Yizheng city of Yangzhou from April 8 to October 8, 2021.

The Xiamen Garden will cover an area of 1,500 square meters and will display Xiamen's distinct geographical and cultural features, including horticultural innovations and the harmony between people and nature.

Xiamen is famous for its "Little Eight Sites", of which the most popular one was "Tai Ping Shi Xiao", according to Chen Hexi, director of the construction of the Xiamen Garden.

Chen said they will reproduce the appearance of "Tai Ping Shi Xiao" in the Xiamen Garden, which was composed of four huge stones, two of which were glued together at one end and open at the other, resembling a smile.

Officials said construction on other city gardens will be started in waves, including the Beijing Garden, Chengdu Garden, Shenyang Garden, Taiyuan Garden, and other overseas gardens such as the Roman Garden, Barcelona Garden, Korean Garden, Japan Garden and Sydney Garden.