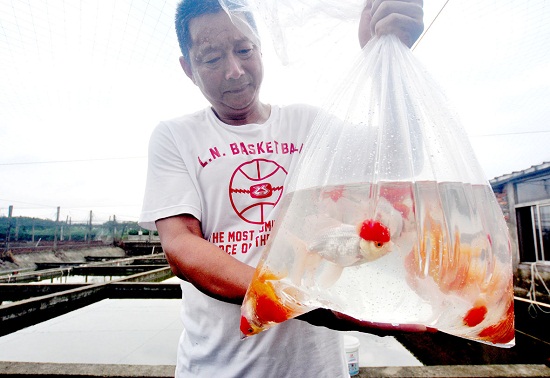 Yin Xuecheng, a native of Dingwei community, has been breeding goldfish for 13 years. [Photo/yznews.com.cn]

Dingwei community, in Yangzhou's Pingxiang town, is famous for its goldfish farms covering about 7 hectares.

Yangzhou has a long history in breeding goldfish, with an old lane in downtown even named after goldfish.

Yin Xuecheng, a native of Dingwei community, owns over 300 goldfish farms of different sizes, accounting for about half of the farms in the area. "Breeding goldfish is both a technical and a physical job," sad Yin.

According to Yin, goldfish breed in mid-April every year, and it takes three to four months for baby goldfish to grow to 10 centimeters in length. Goldfish require good care as lack of oxygen can kill them in groups.

Yin said he has successfully produced tons of insects for baby goldfish to eat by making use of pigeon dung and rapeseed cake to make the water suitable for their growth.

Yin has been breeding goldfish for 13 years. He sells about 300,000 each year to Yangzhou, Chongqin, and Yunnan, Henan and Shanxi provinces, and even to some European countries.

All kinds of goldfish are developed in Dingwei community, Yangzhou's Pingxiang town. [Photo/yznews.com.cn] 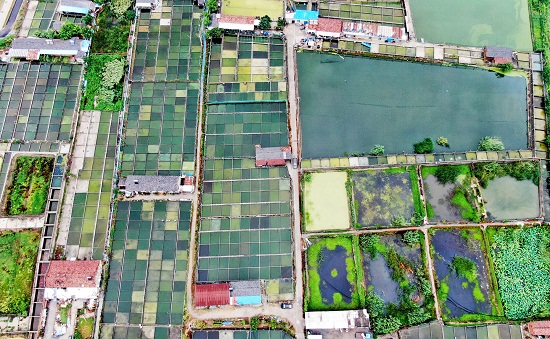 Dingwei community is famous for its goldfish farms covering about 7 hectares. [Photo/yznews.com.cn]