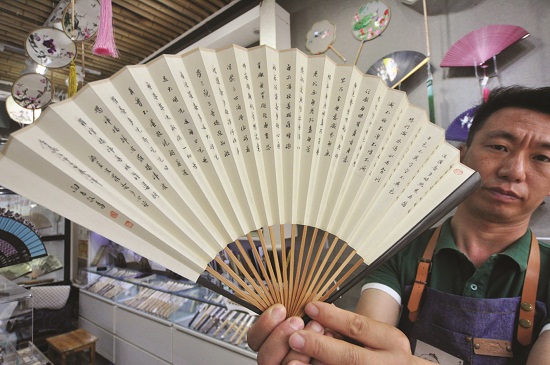 Zhu Guoyong, a 43-year-old craftsman of the Yangzhou folding fan, is the only inheritor of this Yangzhou intangible cultural heritage item.

Back before the advent of air conditioners, a handheld fan was the only way to cool down. According to Chinese folk tales, the fan's history can be traced back to Emperor Shun, who lived before 2000 BC. It's said Shun made the Wuming fan as a symbol of "collecting opinions, and looking for talents to better serve the country".

The folding fans became popular during the Song dynasty (960-1279), and during the Ming (1368-1644) and Qing (1644-1911) dynasties writing poems and creating paintings centered around the fans became common in Jiangsu, Zhejiang, and Sichuan provinces.

According to Zhu, folding fans indicated a person's social status and were a daily item for the elite during the Ming Dynasty. At that time, Yangzhou folding fans were made exclusively for these "literati".

Yangzhou folding fans are made from high-quality materials. Zhu always climbs mountains himself to find bamboo that has been growing for five or six years, and that have no damage or scars. More than 70 different processes must be applied to a single piece of bamboo in order to make it as thin as paper.

Due to the complexity of the process, Zhu makes less than 100 holding fans every year to sell, which range from 3,000 yuan ($424) to 8,000 yuan. However, most of the fans on sale in his shop were made in factories and cost only a few dozen yuan.

"Though fans are no longer a life necessity, people in Yangzhou still like to buy them for their novelty," Zhu said. 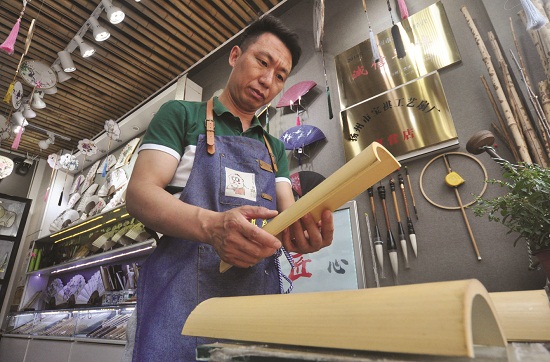 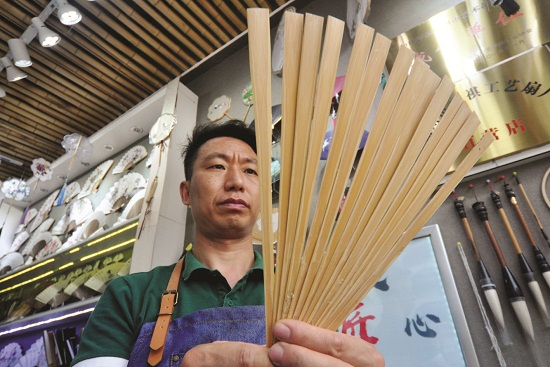 More than 70 different processes must be applied to a single piece of bamboo in order to make it as thin as paper. [Photo/yznews.com.cn]