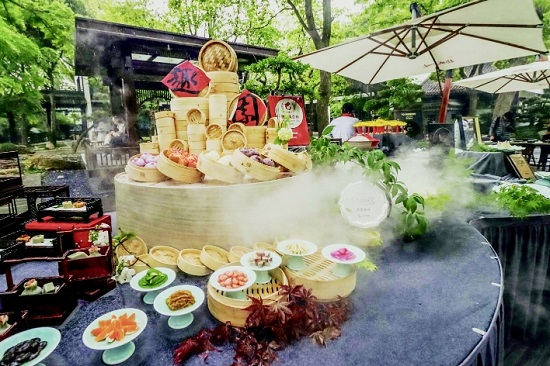 A display of typical Yangzhou dishes. [Photo by Zhang Zhuojun/yznews.com.cn]

A ceremony recognizing a winner of a title of "UNESCO Creative City of Gastronomy" was held in Yangzhou – the city in eastern-central Jiangsu province -- on April 18, according to local officials.

Yangzhou is renowned for its Huaiyang cuisine, which is widely esteemed in Chinese culinary circles and considered to be one of the Four Great Traditions that dominate the culinary heritage of China, along with Cantonese cuisine, Shandong cuisine and Sichuan cuisine.

With a history stretching back more than 2,500 years, Yangzhou was rated as China's fourth UNESCO Creative Cities of Gastronomy in 2019 after Chengdu in Sichuan province, Shunde in Guangdong province and the Macao Special Administrative Region.

During the ceremony, the four cities implemented initiatives via the internet to promote cooperation -- in the innovative food industry, as well as in food education, food culture and tourism -- to show the world a new image of China as "the food capital".

Ernesto Ottone Ramírez, assistant director-general for Culture of UNESCO, said during a video link that Yangzhou was famous for its delicious food. Its development is closely related to the cultural heritage of its food. Food has become a key part of the city's cultural identity, reflecting its diversity and people's creativity, he said.

The UNESCO Creative Cities Network was created in 2004 to promote cooperation among cities that have identified creativity as a strategic factor for their sustainable urban development.