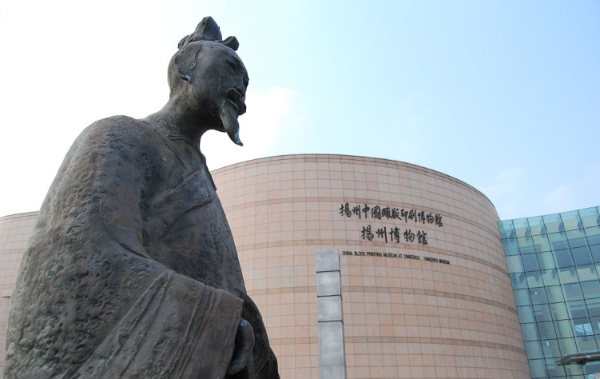 Everyone is familiar with the name Marco Polo (1254-1324), the Venetian merchant and traveler widely famed for his travelogue The Travels of Marco Polo (Il Milione) describing to Europeans the grandness of China, its capital, and other Asian cities and countries. But hardly anybody knows that Polo, who lived in China for 16 years and once served under emperor Kublai Khan of the Yuan Dynasty (1271-1368), was appointed as a local official of Yangzhou, a large commercial hub in East China's Jiangsu province, from 1282 to 1284.

Yangzhou residents have a strong impression of the Venetian traveler. Now, at the easternmost end of Dongguan Street, in a historic area preserving the city's former glory, stands the Marco Polo Memorial, a small museum showcasing his trip to the Eastern world and his three-year political career in Yangzhou, and reflecting the significance of his travels in terms of cultural, economic, and religious exchange.

The memorial is part of the Yangzhou Museum, a modern building covering an area of 50,000 square meters. It shares its lobby with the China Block Printing Museum, and together the two museums are commonly known as the Yangzhou Dual Museum, representing a confluence of traditional local culture and modern civilization. The museum has seven exhibition halls, including a Yangzhou history exhibition hall, an ancient Chinese sculpture gallery, a gallery exhibiting paintings and calligraphy of the Eight Eccentrics of Yangzhou (Yangzhou baguai), a China national treasure hall, and a Jianyang print-making gallery. Exhibits date from the Neolithic Age to the late Qing Dynasty.
The museum holds regular and special exhibitions displaying things such as ancient Chinese earthenware, jade carvings, calligraphy, paintings, bronze ware, cultural relics, local paper-cutting art, and Ming and Qing porcelain.