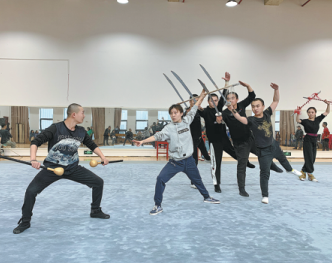 Yan Yu, 71, is an inheritor of Yangzhou puppetry, a city-level cultural inheritance program. Yan is also a teacher at the school.

"Teaching in the traditional way, the student learns both the advantages and weaknesses of the master. The level of the master, to a large extent, limits the student," she said.

"But the school teaching is more comprehensive, and students can learn from different teachers and from each other. They also gain a broader scope of knowledge from art to general knowledge such as math and English."

Liu Zhixuan, 19, is one of the school's latest puppetry graduates.

For Liu, puppetry was introduced to her when she first saw a performance on stage.

"When the spotlight was on the silk fabric and the puppet, I felt like it was something I wanted to do and someone I wanted to become," she said.

Liu said she enjoys life at the school though she doesn't get to go back home very often.

Vu Khanh Linh, a reporter at Viet Nam News, who visited the school recently during the "Hi Jiangsu" media tour, said she learned "how the Chinese government is trying to preserve various forms of culture and art".

"The school has policies to teach students free of charge, who have the ambition in art and may perform for the local troupe and even the national troupe," she said.

She added that it's a good way to preserve traditional culture, which is not only a challenge in China, but in other countries including Vietnam.

Jakhongir Azimov from Dunyo Information Agency in Uzbekistan said he was impressed by the size of the school and how committed the students are.