Activities held in celebration of 970th birthday of Qin Guan

The 10th National Qin Shaoyou Academic Seminar gathers more than 30 scholars from renowned universities nationwide to share their views and insights on Qin Guan, a Chinese writer and poet of the Song Dynasty (960-1127). [Photo/WeChat account: yzs_lyj]

Gaoyou held a series of activities in celebration of the 970th birthday of Qian Guan from Nov 8 to 11.

Born in Gaoyou, a county-level city in Yangzhou, Qin Guan was a Chinese writer and poet during the Song Dynasty (960-1127). His courtesy name was Shaoyou (少游).

Since its inception in 1986, the conference has been held in Gaoyou a total of five times.

Cheng Yuzhui, head of the China Qin Shaoyou academic research association and professor of Chinese language and literature at Peking University, commended Gaoyou's long-term dedication to the research and promotion of Qin's works.

Qin is not only a literary genius, but also had deep insights into how to govern the country, said Cheng, calling for more research into Qin's ideas on state governance.

Other activities held in the city included calligraphy exhibitions, poetry recitals, and lectures revolving around Qin. 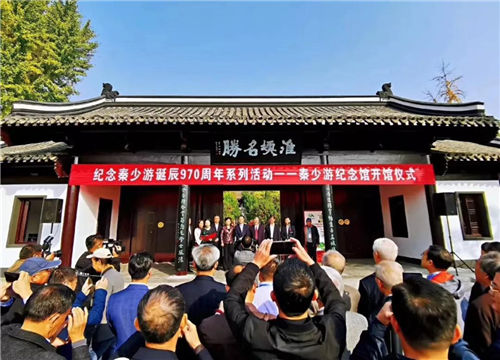