A fishing village in Hanjiang district, Yangzhou was recently recognized as a “Beautiful Chinese Leisure Village” by the Ministry of Agriculture and Rural Affairs, local media reported.

The ministry released the list of 2019 list of Beautiful Chinese Leisure Villages on Nov 13. Yanhu village was among the nine villages in Jiangsu province to make the list.

Formerly nothing more than a small backwater fishing village, Yanhu village on the west bank of Shaobo Lake has now emerged as a popular tourism destination.

Ma Mingbing, a local villager, told People's Daily that fishing used to be the main way for local villagers to make a living, at a per capital annual income of just 5,000 yuan ($ 746.2).

However, relying on the village's abundant fishery resources, Ma started to run homestays in 2014, where visitors can not only enjoy fresh fish and shrimps, but take in the enchanting wetland views as well.

Ma's decision proved to be a good one. Another 30 households in Yanhu village followed his lead and now have an average annual income of more than 30,000 yuan.

Liu Deibao, Party chief of Yanhu village, was quoted by People's Daily as saying that the village is seeking development by promoting the integration of ecology, culture and tourism.

Yanhu village has won numerous laurels, including being labeled as "China's Most Beautiful Fishing Village". 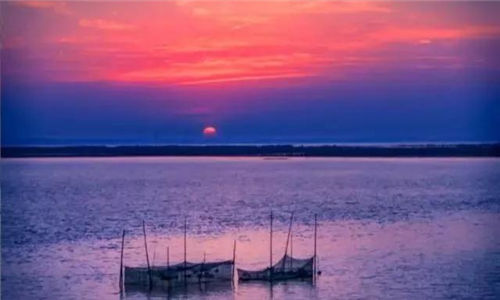