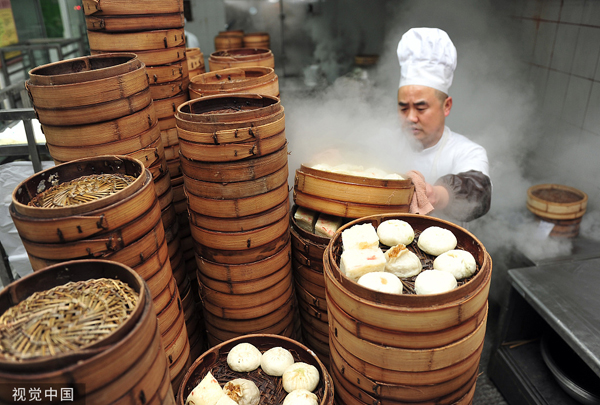 The kitchen of Fuchun Teahouse in Yangzhou. [Photo/VCG]

Fuchun Teahouse is famous for its original tea and dim sum. In December 2006, the teahouse was recognized by the Ministry of Commerce in the first batch of China time-honored brands.

The teahouse combines flowers, tea art, dim sum and other dishes together, allowing people to appreciate delicious food and fragrant tea in a quiet, elegant environment.

Kuilongzhu, an original type of tea created by Fuchun Teahouse, has the flavor of Zhejiang province's Longjing tea, the color of Anhui province's Kuizhen tea and the fragrance of Fujian's Zhulan tea.

Fuchun dim sum is handmade by traditional methods with exquisite skills. The dim sum has elegant shapes, many varieties and different tastes. It has won many titles and awards nationwide.

The tea and dim sum making skills of Fuchun Teahouse were included in the national intangible cultural heritage list in 2008.