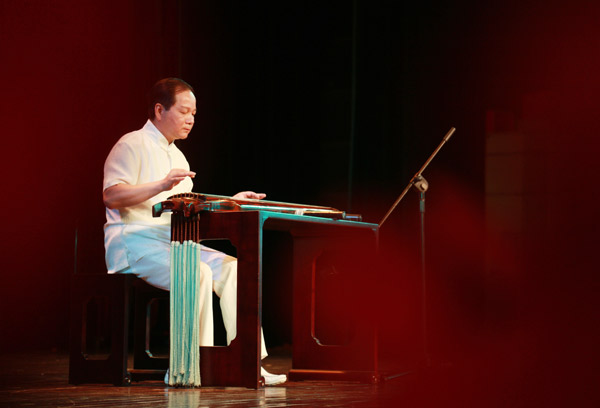 The guqin, also known as qin or qixianqin, is a plucked seven-string musical instrument of the zither family. Current archaeological excavation data confirms that the shape and structure of guqin had been completed by the late Han Dynasty (206 BC-220 AD).

Guangling school is one of the important schools of Chinese guqin art, which is mainly practiced now in Yangzhou, Jiangsu province. The school's origins can be traced back to the Warring States Period (475-221 BC).

Guangling school of guqin reached its zenith during the Qing Dynasty (1644-1911), when many Yangzhou musicians rose to fame because of their mastery of the instrument, in practice and in theory.

A guqin master named Xu Changyu wrote the famous music score of Chengjiantang Qinpu during that period, which marked the fact that the Guangling school had reached maturity. Xu's style of guqin playing features a subdued tone and a flexible rhythm, and displays a taste for simplicity and subtlety.

In modern China, Yangzhou musicians led by Sun Shaotao established the Guangling Qin Society in 1912, the activities of which were suspended in 1937 due to the War of Resistance Against Japanese Aggression (1931-45).

In 1984, Guangling Qin Society resumed its long-interrupted guqin activity. In addition to organizing a guqin players' gathering every year, it carried out guqin art exchanges with other societies and presented the art form to guests from home and abroad.

The Guangling school of guqin combines the vigor of the northern school with the softness of the southern school. It was included in the national intangible cultural heritage list in 2008.