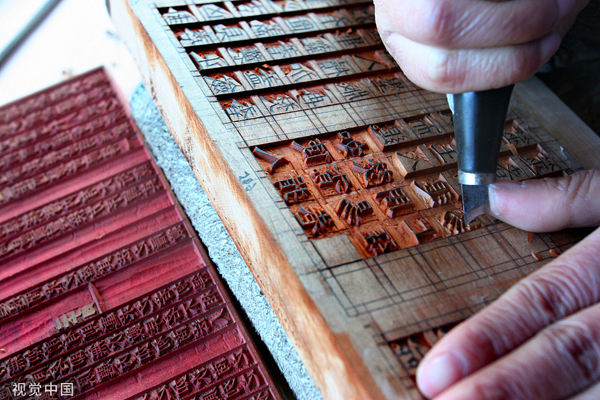 A craftsman engraves Chinese characters on a woodblock. [Photo/VCG]

Woodblock printing first appeared in the Sui (581-618) and Tang (618-907) dynasties. Based on the technique, Bi Sheng, invented the world's first movable type printing press during the Northern Song Dynasty (960-1127).

However, woodblock printing was not completely replaced by movable type printing, and still occupied a mainstream position in ancient Chinese printing industry.

The woodblock printing process is very complex, and can be divided into four parts: preparation, engraving, printing and binding. Each link has a number of procedures. Guangling Ancient Books Printing House retains the only complete set of ancient books in China made by this process of more than 20 procedures.

According to historical records, Yangzhou woodblock printing can be traced back to the Tang Dynasty and achieved unprecedented development in the Qing Dynasty (1644-1911). During the reign of Emperor Kangxi (1661-1722), more than 3,000 volumes were produced for the royal household with the woodblock printing technique.

In 1960, Yangzhou Guangling Ancient Books Printing House was established with aim of protecting and inheriting the woodblock printing technique, which was included on the national intangible cultural heritage list in 2006.