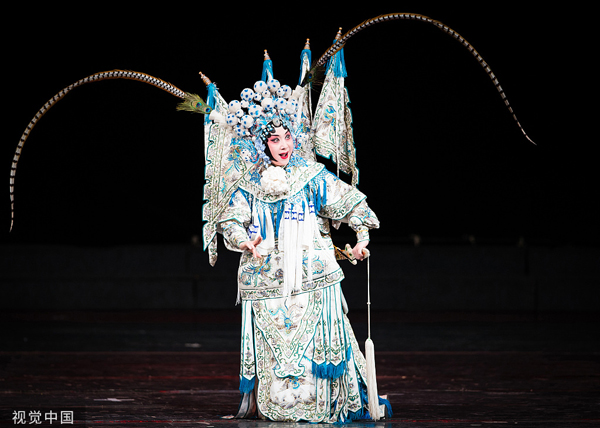 A scene from a Yangzhou Opera performance [Photo/VCG]

Yangzhou Opera is a traditional opera popular in Yangzhou and Zhenjiang in Jiangsu province as well as some places in Anhui province and Shanghai.

Based on Yangzhou's folk song and dance drama, huagu opera, and a unique opera in northern Jiangsu, Yangzhou Opera finally came into shape by absorbing elements of Yangzhou ditties.

The characters in Yangzhou Opera include Sheng (male), Dan (female), Jing (male with a strong personality) and Chou (a comical figure).

There are more than 400 traditional plays in Yangzhou Opera, and the most popular ones include Zhen Zhu Ta (Pearl Tower), Yu Qing Ting (Jade Dragonfly), and Wang Zhaojun.

With high appreciation and aesthetic value, and rich ideological connotations, Yangzhou Opera can convey the cultural concepts and aesthetic customs of specific regions, and has cognitive and historical research value as a significant cultural item. It is a precious treasure in the Chinese drama culture.

Yangzhou Opera was included on the national intangible cultural heritage list in 2006.