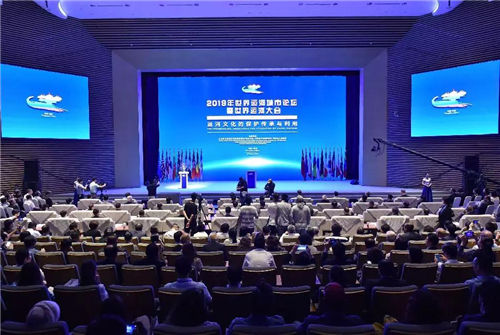 The Grand Canal is not only an integral part of Chinese identity, but also a bridge linking China with western civilizations, noted Wu Zhenglong, Governor of Jiangsu.

The province is willing to contribute its wisdom to the protection, inheritance and utilization of the Grand Canal culture, and join hands with world canal cities for a better future, he said.

Wu made the comments while addressing the opening ceremony of the 2019 World Canal Cities Forum and World Canals Conference in Yangzhou on Sept 27.

The Grand Canal is an ancient water conservancy project, and is the world's oldest, longest and largest canal.

It has a length of 2,700 kilometers and was the main artery for ancient China's north-south traffic. It passes through a total of eight provinces and municipalities.

According to Wu, the permanent resident population living along the canal in Jiangsu accounts for 85 percent of the total in the province, and areas near the canal yield 91 percent of its regional GDP.

Yangzhou is the birthplace of the World Canal Cities Forum and has been selected as the host of World Canals Conference this year, he said, adding that Jiangsu is eager to take advantage of the two events to cement cultural links with canal cities and urban economies worldwide.

Luo Shugang, minister of Culture and Tourism in China, noted that canal culture is an important part of human civilization. The Grand Canal is not only a valuable historical heritage, but also a symbol of Chinese culture.

Luo acknowledged the leading role Yangzhou – where the canal originated – has played in the river's protection and utilization and called for concerted efforts to spread the story of China embodied by the canal to the world.