As 2019 marks the Year of the Pig in the Chinese zodiac, Yangzhou Museum launched a pig-themed exhibition of antiques and modern artworks on Jan 29 to celebrate the upcoming Spring Festival.

More than 30 sets of antiques, from the Han Dynasty (206 BC-AD 220) to the Qing Dynasty (1644-1911), including pottery, sculpture, porcelain, jade ware, calligraphy and painting, are showcased at the museum.

The antiques give visitors a glimpse of the ancient farming civilization related to pigs, as well as traditional pig zodiac culture and customs.

“Since the Tang Dynasty (618-907), the image of the pig has become more secular. And the increasingly rich social culture added more stories to the artistic image,” said Shu Jiaping, the museum’s curator.

A celadon pig figurine from the Tang Dynasty is on display at the pig-themed exhibition in Yangzhou. [Photo/yznews.com.cn]

In addition, more than 50 sets of modern artworks, including paper cutting, embroidery and festive lanterns are on display.

During the Spring Festival holiday, from Feb 5 to 10, visitors can experience woodblock printing, one of Yangzhou’s intangible cultural heritages, by making a painting themselves at the museum. 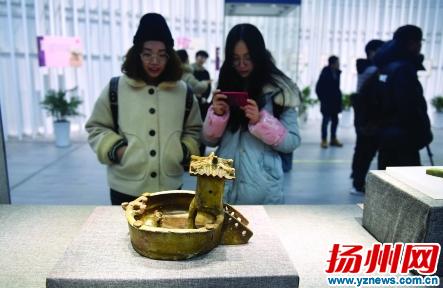 Visitors take photo of a green-glazed pigsty-shaped pottery from the Eastern Han Dynasty (25-220) at the pig-themed exhibition in Yangzhou. [Photo/yznews.com.cn] 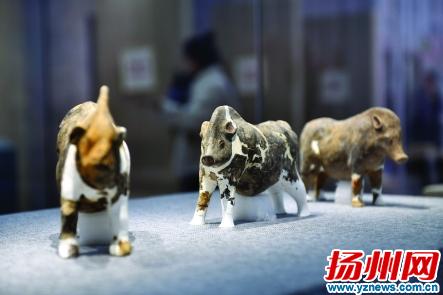 The pig-shaped earthenware works， which date back 6,000 years， are on display at the pig-themed exhibition in Yangzhou. [Photo/yznews.com.cn]