The story of the ancient Chinese monk Jianzhen's Buddhism journey to Japan has recently been adapted to the stage. The Chinese monk attempted to visit Japan six times and finally succeed in the year AD 754. His mission was to spread the messages of Buddhism and the stage play vividly portrays his trials and tribulations. 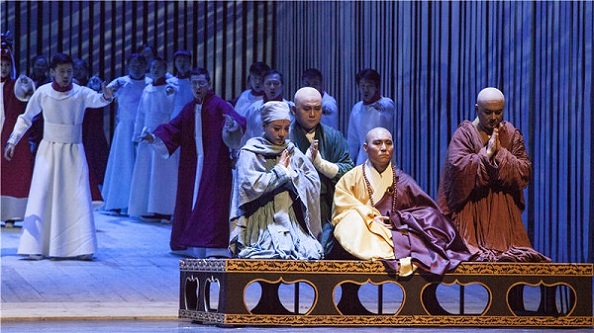 The Jiangsu Arts Performing Group has brought to the story of Jianzhen and his journey to Japan to the stage. [Photo/National Center for the Performing Arts]

The Jiangsu Arts Performing Group adapted the ancient tale into a drama and launched a performance tour to Japan in December 2016. So far it has received good feedback from audiences. Using well-researched historical evidence, the drama artistically introduces this ancient story of Chinese-Japanese cultural exchange to contemporary audiences.

In AD 688 Jianzhen was born in Guangling, an area is now known as Yangzhou, which is situated in East China's Jiangsu province. At the age of fourteen he became a disciple of Daming Temple and his intelligence and devotion eventually led to him becoming the temple's abbot.

In AD 742, the first year of the Tang Dynasty's (618-907) Tianbao Period, he was invited to Japan by native monks. Although it would take him six attempts, he finally succeeded in reaching the land to the east of the Chinese mainland and his legacy remains strong to this day. 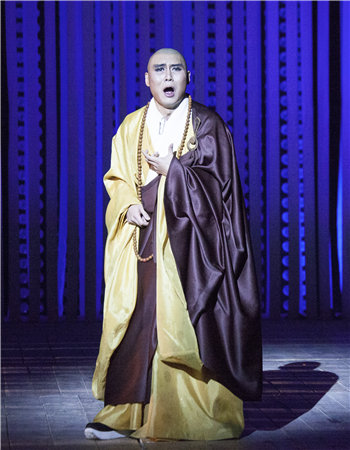 China's famous bass singer Tian Haojiang plays the role of Monk Jianzhen in the drama. [Photo by National Center for the Performing Arts]

Accompanying him on his AD 754 mission were artists, doctors, and skilled craftsmen. He brought many books and cultural relics to Japan for the purpose of educating the island's inhabitants. He is widely considered as one of the great figures of the Tang Dynasty.

Today, the eternally burning lamps of China's Yangzhou Daming Temple and Japan's Toshodaiji Temple symbolically echo this spirit of communion and project forward the warm light of peace and harmony. 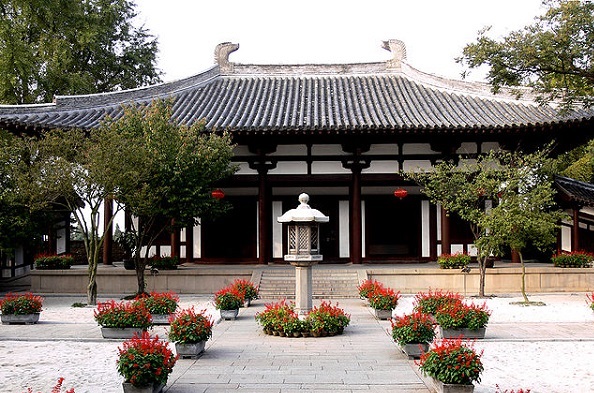 The stage drama made its Chinese debut on Feb 4 at the National Center for the Performing Arts in Beijing. Ticket prices range from 80-580 yuan ($12-84) per person.