The old city of Yangzhou in east China's Jiangsu province is known all over the world for its distinctive gardens. Yangzhou gardens developed their unique style throughout the history embodying both resplendent landscapes and philosophy of emptiness and reality.

Here are some most gorgeous gardens visitors must have a look at during their trips. 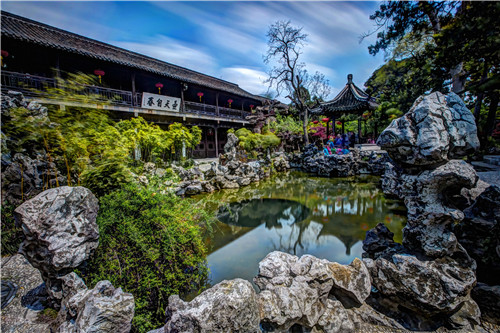 Boasting a high aesthetic value and the longest history among all the classical gardens in China, the Geyuan Garden is a well-preserved traditional garden that was renovated and expanded by salt merchant Huang Zhiyun in the Qing Dynasty (1644-1911). Huang based his work on “Shouzhi Garden”, built by a wealthy Yangzhou resident during the Ming Dynasty (1368-1644). Its design features a delicate arrangement of bamboo and stones. The garden features several attractions worth taking a discovery trip, including the Nanmu Hall, the Xilu Residence, the Chun (Spring) Hill, Xia (Summer) Hill, Qiu (Autumn) Hill and Dong (Winter) Hill.

There are beams and columns in the hall consist of precious nanmu, which is a type of lumber rarely used in construction. There are three round tables with marble inlay and short stools in the center. All the frameworks and furniture in the hall have a round shape, which means reunion and perfection in Chinese culture.

The Xilu residence was the main daily venue for the Huang family’s female members.

The well-known four hills respectively representing four seasons in a year, feature different styles. The Chun (Spring) Hill consists of two flower terraces on both sides. The hill is decorated with bamboo and stalagmites, which cast a shadow on the wall on sunny days. The Xia (Summer) Hill was built with grey Taihu  Lake stone, which features pores and holes and is widely used in landscaping. The Qiu (Autumn) Hill is composed of Huangshi stones, a unique kind of stone in Anhui province. With their various shapes and colors of ochre, yellow, and red, they create a majestic scene with the trees and the pavilion at the top of the hill. The Dong (Winter) Hill was created by Xuancheng stones from Anhui province. The stones contain quartz, which enables them to shine in sunlight and become snowy white in shadow.