More than 500 cyclists from China and overseas countries zoomed around Yangzhou's Baoying Lake on Oct 23 during the third Baoying Lake cycling race.

This year's event involved athletes and cycling enthusiasts from different provinces and regions across China, along with foreign countries including US and Germany. 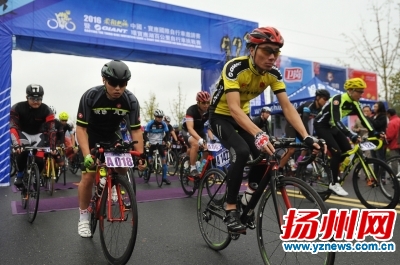 Riders fly out of the blocks at the start of the third Baoying Lake cycling race in Baoying county, Yangzhou on Oct 23. [Photo/yznews.com.cn]

The participants completed a tough 105-kilometer route starting from downtown Baoying and passing through Provincial Highway 331, 332 and Huaijiang Highway, before returning back to the starting point. Zhou Xiaolong from the 1799bike club finished first with a time of 2:46:52.

"It was difficult when I turned back and had to cycle against the wind," said Zhou. "I would like to thank my teammates who broke the wind for me so I can win the championship."

Aside from the racing, the riders also enjoyed the natural landscape of the area, including the beautiful stretch of the Grand Canal that winds through Yangzhou. 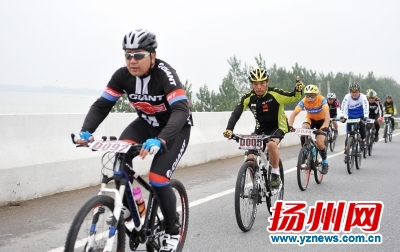 Cyclists race along the road during the third Baoying Lake cycling race held in Baoying county, Yangzhou on Oct 23. [Photo/yznews.com.cn]

"I felt good cycling on this beautiful route," said Sunhui, a cycling enthusiast who holds the record for riding along the Sichuan-Tibet Highway.

Jointly sponsored by Yangzhou Sports Bureau and Yangzhou Tourism Bureau, the cycling race has become a platform to promote Baoying county and the local economy and tourism.