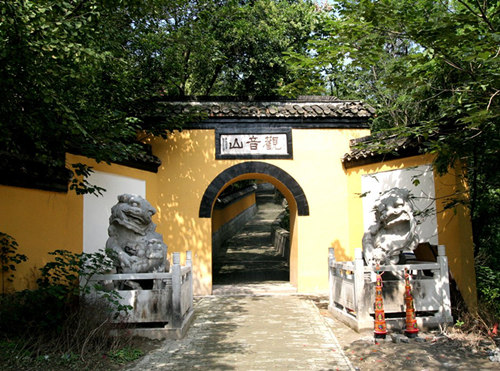 Guanyin Mountain is a peak of the Shugang range in northern Yangzhou and occupies the highest point of the city.

The temple on the Mountain worships four great bodhisattvas, with Guanyin the most revered one.

Tucked away among the temples and woods is a villa, said to be the site for an imperial residence built by Emperor Yang of the Sui Dynasty (581-681), a notorious tyrant in Chinese history. 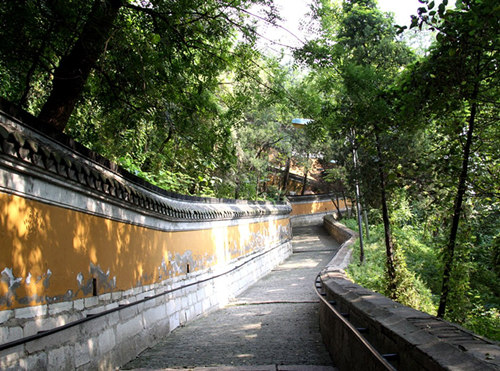 Buddha statues in Guanyin Mountain have unique characteristics. The difference between them and Buddha statues elsewhere is that Bodhisattvas are worshipped here, including those from the four famous Buddhist mountains in China, while in other places the statue of Buddha is surrounded by other god figures like a moon surrounded by stars. On the east side is Manjusri and on the west side is Samantabhadra. Behind the hall of Manjushri is the hall of Ksigarbha. Of the four Bodhisattvas, Avalokitesvara occupies the most important position. In Yuantong Treasure Hall, the principal hall, the giant statue of Avalokitesvara is placed.
2、The well-known incense market of Guanyin Mountain started in the Ming Dynasty. It booms on the nineteenth days of February, June and September, symbolizing the birthday of Avalokitesvara, the date of her enlightenment and the date of her becoming a nun. On this day temple incense fall is held in Yangzhou and large quantity of incense is traded. The incense market here can be paralleled with that of Big and Small Jiuhua Mountains and that of Sanmao Mountains.