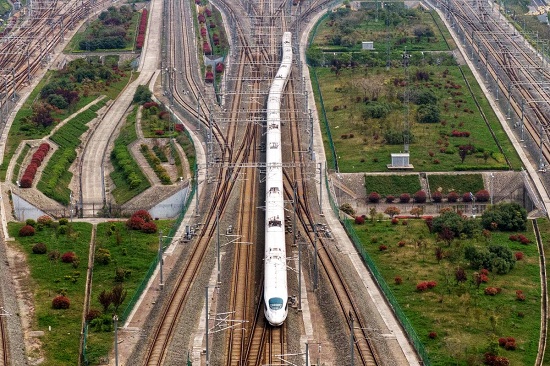 A high-speed train leaves Nanjing South Railway Station in Nanjing, Jiangsu province, on Aug 7, 2020. A new map of China's railway system was adopted for the second quarter of this year to meet the traffic needs of passengers and cargo. [Photo by Yang Bo/China News Service]

The uneven development of the railway network in Jiangsu province is on track to close its connectivity gap as a new high-speed railway linking four cities scattered across the province commenced full operations on Friday.

Two other new high-speed lines running through the less-developed central and northern part of Jiangsu have also begun trial operations recently, paving the way for deepening economic ties with the rest of the country, according to railway authorities.

Jiangsu is a major economic engine in the Yangtze River Delta, a region that also includes Shanghai and the provinces of Zhejiang and Anhui. Compared with more affluent cities in the south, its central and northern parts have had limited access to high-speed railways, creating impediments to public transportation and economic development.

The new line that opened on Friday stretches 304 kilometers and is designed for speeds of up to 250 kilometers per hour. It runs across Lianyungang and Huaian in the north, the central city of Yangzhou, and Zhenjiang in the south, said China Railway Corp.

About 35 percent of the planned project had already begun operations in December last year, it added.

With its complete rollout, the four cities are now integrated into the national high-speed rail map and have gained much faster routes to key cities in the area.

"For instance, travel time from Lianyungang to Shanghai will be cut by four hours and 50 minutes to 3.5 hours," Chen Wanjun, an official with China Railway Shanghai Group, said during a news conference on Thursday.

Currently, 17 pairs of trains enter service every day, Chen said, adding that the number of trains will increase greatly starting in late January.

Zhu Peide, a railway official in Jiangsu province, said the new line is expected to bring direct benefits to over 20 million people, and 11 railway stations have been set up along the line.

"The line's full operation is highly anticipated by people in Jiangsu," Zhu said during the news conference.

The other new lines undergoing tests and trials in Jiangsu are shorter, but they fill in significant gaps in China's blueprint to create a comprehensive high-speed rail network, said China Railway Corp.

One of them is a 180-km line connecting Xuzhou and Lianyungang. It began troubleshooting test runs on Thursday and is designed to operate at speeds of up to 350 km/h.

The company said the project is an important component of the eight horizontal and eight vertical railway lines depicted in the country's medium and long-term rail development plan.

Joining other existing rail sections, the new line's completion will mark the creation of a smooth high-speed route that runs from the coastal city of Lianyungang all the way to the inland city of Urumqi in the Xinjiang Uygur autonomous region.

The other new line, which started trial operations on Nov 27, connects Yancheng and Nantong. It is expected to meet requirements for full operation in late December and will become the first line in northern Jiangsu to operate at 350 km/h.

The stretch is part of a coastal passage that runs across large swathes of coastal areas.

"The Yancheng-Nantong rail line will help promote the rejuvenation of central and northern parts of Jiangsu and improve the capability and quality of China's overall coastal railway systems," the company said.