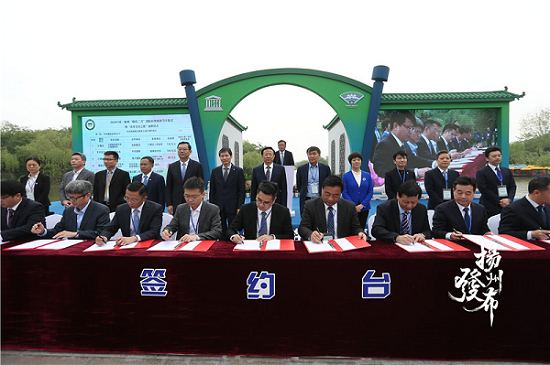 The project signing ceremony is held at the 2020 China Yangzhou Flowery March International Economic, Trade and Tourism Festival on April 18. [Photo/Voice of Yangzhou]

A total of 178 projects focusing on advanced manufacturing, modern services and sci-tech cooperation with a gross investment of 187.83 billion yuan ($26.53 billion) are expected to be signed during the festival.

During the festival, the city will issue tourism and catering cards to visitors through both online and offline channels, offering cash rebates in an attempt to build the city into a center of cultural tourism and boost the recovery of the service sector.

The festival also included the unveiling ceremony of the "Food Capital of the World".

With a history of more than 2500 years, Yangzhou was rated as China's fourth "Food Capital of the World" in 2019 after Chengdu in southwest China's Sichuan, Shunde district in Foshan, South China's Guangdong, and Macao.

As a member of the UNESCO Creative Cities Network, Yangzhou has taken action to fight the COVID-19 outbreak and introduced specific measures to support the local catering sector, said Ernesto Ottone Ramírez, Assistant Director-General for Culture of UNESCO, during a video connection.

He expressed belief that Yangzhou has the ability to weather the crisis with its strong cultural resources. 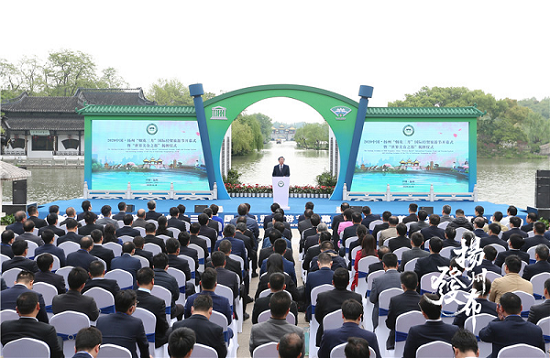 The Flowery March International Economic, Trade and Tourism Festival has been held for 19 consecutive years and has become an important platform for promoting Yangzhou's economic and trade cooperation and cultural exchange at home and abroad.